G.I. Joe: Retaliation (Widescreen)
FOR THOSE NOT WANTING OR NEEDING TO SPEND MUCH MORE THAN THE PRICE OF A MOVIE
TICKET

G.I. Joe: Retaliation / G.I. Joe: The Rise Of Cobra (2-Pack) (Blu-ray) (Walmart Exclusive)(Widescreen)
I found this interesting Walmart has a 2 pack Exclusive with this one I am guessing both  THE Rise of Cobra, and
G.I. JOE RETALIATION are in widescreen format

G.I. Joe: Retaliation / G.I. Joe: The Rise Of Cobra (2-Pack) (Walmart Exclusive) (Widescreen)
Here much like the one above is also a Walmart Exclusive bundle except in a widescreen and Blu-ray 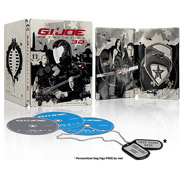 
Now correct me if I am wrong but in away I see this as a Walmart exclusive in some ways as unless you live outside the USA  or Pre-ordered from a Foreign Amazon site the only way to get this in the USA is to Pre-order from Walmart which I have :D I am still very excited to get this one as a collector/ collector Item :) some say that this will be in the $5 bin in no time. Well I am still going to pre-order, and if in 90 days or less if it goes on sale then I could return it as I was not going to open it. As I was going to buy the G.I. Joe: Retaliation (Blu-ray 3D / Blu-ray / DVD / Digital Copy +UltraViolet) as well that was until now thanks to the one below :D
There will indeed be a G.I. Joe: Retaliation “Extended Cut” Blu-Ray released in the US, and it will be an exclusive to Best Buy stores.

Some questions came up in regards to this, and YoJoe Forum Member NateBryant1985 stepped up to answer them. As an employee of Best Buy, he gave the following information about the promotion:

“The push will start on 7/16 as pre-orders will be made available in stores and should be in the Best Buy Circular ad as well (I’m an employee). You put at least $14.99 down and starting that day you can watch the Theatrical Cut on Best Buy’s Cinema Now streaming service. The Extended Action Cut will then be available on 7/30 alongside the regular version as well as the Theatrical 3D version.”
So the word is that pre-orders will start on 7/16 (Tuesday) and that it will also appear in the Best Buy circular. Sounds like there are some incentives to pre-order, as you’ll be able to watch the theatrical version online immediately, then get the “Extended Cut” on the 30th with all other releases.

Besides other things I hope to  do after work Tuesday hope to go be able to Pre-order so wish me/us luck:)

Extended Cut, should have some significant additions of footage (including the bar scene seen in several tv spots and trailers) and significantly more footage (combat and otherwise) in the final battle as well. Which I hope will included more shots of the  cobra commander. Sadly we got no game with this movie but with all these versions of the movie my wallet says thanks:)
This is great news and nice that thanks to the web and the member posting on the YoJoe forums we know about this before having bought the "wrong version First but might still in up with 3 or four copies of almost the same movie?